Horizon Yacht Sales - Getting to know John Welch: An interview 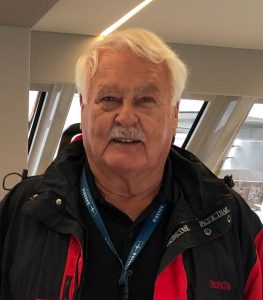 Come read an exclusive Getting to know John Welch interview.

Where were you born? Amersham, Bucks, U.K. A fair while ago now!

Where was school, and what did you like best? Schooled in Hudson, Quebec, Canada, then Bishop’s University in Lennoxville P. Q. I have degrees in Business Administration and Psychology. Sports were Skiing, Curling and the Georgian Tavern. College is mostly a winter experience in Canada.

When did you learn to sail? My parents settled in Hudson next to the Yacht Club on the Ottawa River which set the stage. I started sailing when I was 7 in cadets, then to the firefly and Y-flyers, and we owned a catboat. Pop signed me up for golf lessons, but that did not work so well….eh?

What next? I spent 4 years with a newsprint company in Montreal in Export Sales travelling through Central and South America. Shared a ski house in the Laurentians where I was a ski instructor on Saturdays and we created a Luge Run for Sunday fun. We morphed into the Canadian National Luge team and competed in the Grenoble Winter Olympics and Worlds in Sweden. We had “survival” results but it was the end of my selling newsprint days!

I joined Roger Hewson in the Marketing department of his start-up company “Sabre Yachts” and later I joined Hood sail-makers in Marblehead as a “sail designer”. It was a fun time and I was often competing aboard top ocean racers as sail trimmer, sail seller and helmsman. Then on to Ranger Yachts (Gary Mull designs) based in New Jersey as East Coast Sales Manager, then to Costa Mesa Ca, as National Sales Manager. I’ve also been at C & C Yachts in Portsmouth RI, as Eastern SM, then as Western SM, based in Niagara -on -the – Lake, Ontario.

I then became a Yacht Broker for The Moorings in Ft. Lauderdale in 1999 and moved to Tortola in 2004 before joining Horizon in 2010. I thoroughly enjoy being a yacht broker. I discuss a prospective owner’s objectives and then source qualifying yachts for their consideration. I try to make every sales transaction move forward with transparency and as seamlessly as possible. I build relationships based on trust and respect, old-fashioned values in today’s modern world.

What about sailing? I’ve had a varied sailing history, I’ve won the North American Junior Sailing Championship (Sears Cup) and was a Sailing instructor for 5 summers plus a team coach at Cleveland Yachting Club.

So how did you end up living in the Caribbean? The previous manager of The Moorings Yacht Brokerage office in Tortola retired so I grabbed the chance to move. That was back in 2004. I joined Horizon in 2010 and I’ve sold around 500 boats throughout my career and like to think that I’ve helped make a lot of people happy.

Just recently I have re-located to St. Pete Beach, Florida. Still not far from palm trees and sunshine! I continue to help people live their dreams and place yachts on our charter bases. I work hand in hand with Giles Starkey who is now Horizons’ Brokerage Manager in Tortola.

Favourite rum drink: Got to be the Dark & Stormy, it’s a classic

Most interesting person you have met? Squeaky Street…he’s a wacky clown!

Pet hates: People being inconsiderate to others.

What are you most proud of? Not experiencing a major injury, but then again I haven’t been kiteboarding yet!

How long have you been married to the lovely Nancy? 40 years and I’ve loved every single day.

Three words to sum up living in the Caribbean: Tradewinds, sailing, fun