Getting to know Robin Hodges: An interview 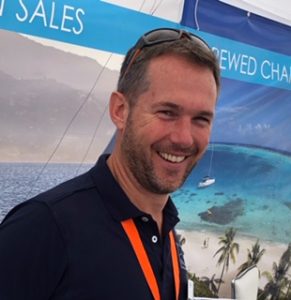 When did you learn to sail? I grew up with boats, spending much of my childhood on the water. I was sailing before I could walk, then started racing single handed dinghies when I was seven and have ever since. As a teenager I became a sailing instructor as soon as possible, then spent most holidays teaching RYA courses and also worked for the Harbour Authority.

What was next? At eighteen I joined P&O (Princess) Cruises and qualified as a Deck Officer on Cruise ships. Then later as a Navigating Officer I spent a number of years at sea working my way around the World (good way to visit over 50 countries in a few years!). My travels took me all over and in my time off I was delivering yachts to/from the Mediterranean.

Other jobs? After delivering yachts, I became a yacht broker in 2000. I became a Multihull specialist, which gave me the opportunity to move from the South Coast of the UK to Annapolis, Maryland, USA. I sold over a hundred new catamarans within five years. I’m pleased to say I sold the first Lagoon 450 into the US, now the most popular 45 foot catamaran ever. I also have worked well over a hundred boat shows in 25 cities.

When did you start with Horizon? I started as yacht sales manager 5 years ago, after working in St Martin. Now you’ll find me at the major boat shows (Annapolis, Miami, Newport, Cannes, Southampton, La Rochelle, Dusseldorf and the Multihull show in La Grande Motte), or visiting the manufacturers in France or Germany (Nautitech, Jeanneau, Lagoon, Bavaria, Fountaine Pajot).

My role involves not only helping buyers to find the best fit, but also looking after the logistics of the whole process from seeing the new build in the factory, to launching in France, commissioning, rigging, equipping with additional equipment, before arranging delivery by sea or ship to the Caribbean. (And here is a sales plug!). Horizon offers a week’s instruction to the owner of a new yacht before we place it in the charter fleet (if it is going into charter management). We also work closely with buyers who want a yacht for their own private cruising use. We help select the most relevant systems as well as ensuring that their boat is thoroughly tested and ready for its blue water voyaging.

What about sailing and qualifications? My passion has always been yacht and dinghy racing.  I have raced all over including  the US, UK and the Islands. Each year I have been fortunate to race in races, regattas or fleet championships on…ready for it?

I am an RYA Yachtmaster (as well as Advanced Powerboat and Sailing Instructor) and have sailed on a vast range of boats, with numerous deliveries.

I trained with the Royal Navy in my teens on leadership and team building courses.

In 1997 I became a volunteer RNLI Lifeboat Crew member on the all-weather lifeboat and later qualified as a helm on the inshore lifeboat. I’ve had plenty of training including a Coxswain’s Course, Offshore Boat Handling, Diesel Maintenance Engineering, Advanced Helm’s course, and First Aid.

Other sport? My other passion is skiing, and I have been fortunate to ski all over for over thirty years. For exercise I enjoy rowing and have competed in the World Pilot Gig Championships. When time allows, I get out paddle-boarding, cycling, windsurfing, running, diving or water-skiing.

Pet hates? Poorly tied up yachts and fenders over the side whilst sailing!

Most interesting person you have met? Stan Honey – offshore navigator (Volvo, Transpac and Groupama 3) and inventor of Sportvision (Invented the technology that shows the First-Down line in American Football, ‘glowing’ hockey pucks and America’s Cup LiveLine)

What are you most proud of? My son – sailing on a Hobie flying a hull, before he was six months old!

Three words to sum up living in the Caribbean: Sailing, Sand, Sunsets